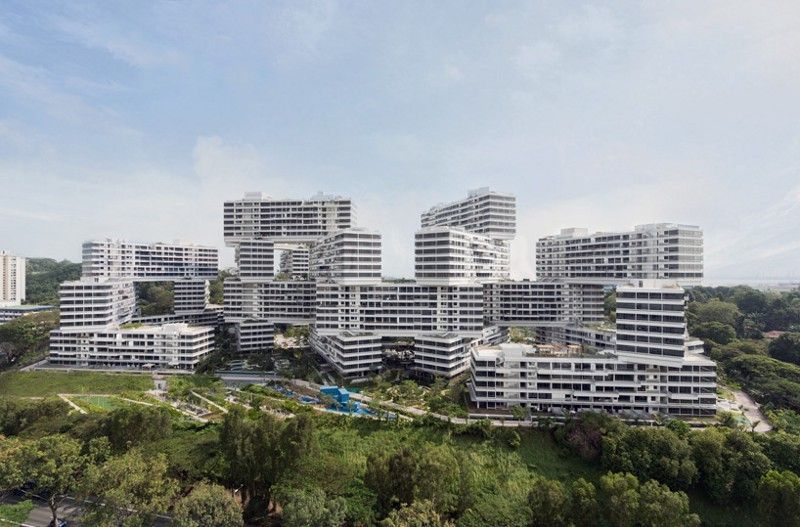 Rem Koolhaas’ work represents in some ways the endless struggle between ideas and reality, between mind and body. Or the body of an idea and what it eventually becomes when it’s drawn into the real world.

This is one of OMA’s latest project: named “The Interlace”, it rises in Singapore and is an apartments complex of 31 blocks scattered and piled one on the others. At least they look like this, like there’s no rule into their design, while actually there is one: seen from above they seem arranged in a sort of exhagonal pattern. Smart idea, almost impossible to grasp while looking at them from the ground or from a bird’s point of view.

Koolhaas intentions were indeed different: instead of building stand-alone towers, he tried to work with smaller but much more intertwined objects, in order to create interactions and random relationships and links between the inhabitants. Smart.

Good plan, good ideas to start from. What came out is — to be polite — a little different. I won’t say disappointing. Let’s say he completely forgot the aesthetic side: each block is, well, a residential block. Anonymous. Nobody would notice it if it where just laying here or there. Stuck it on another one, and then both on another couple of the same size and design and what do you get? A pile of ugly residential blocks. It could somehow be that the addition may help distracting the observer from what the complex is made of, but it still remains made of badly designed (not from a functional point of view, I can’t honestly argue on that, but strictly from an aesthetic side) apartment blocks.

Koolhaas is no new to this kind of design. It’s like he strongly believes that a good idea is good nonetheless it becomes reality: something of its good nature must survive, even if the execution lacks here and there.
He’s probably right most of the times: he still is one the most important architects in the world: I presume more because of his theoretical strength than for his body of work. It must be because he’s so assertive and strong in his mind and power to comunicate his ideas that he’s able to put in awe almost everybody. A clever mind is always something beautiful and fascinating to stare at.

In fact the project has been chosen by the Council on Tall Buildings and Urban Habitat as the winner of the Global Urban Habitat Award 2014 because its design is ‘an exemplary integration with its surrounding environment”.

Integration? Are you joking? Integration compared to what? The surroundings are — from what we can see from the pictures — a tropical forest. Integration is supposed to be the “act or instance of incorporating or combining into a whole”. Something new that becomes part of something existing. Well: now it exists somewhere near Singapore. The fact that it actually is part of what was before uhm, I’m not sure.

The Interlace is, from many points of view, paradigmatic of Koolhaas’ attitude towards design and the environment. He’s not surprisingly known for his contemptuous words “Fuck the context”. Who cares about the context, being it a forest or a medieval town: ideas are much more powerful than that.

Again not surprisingly Koolhaas has never designed anything in a very strong and historic environment, apart from the Fondaco dei Tedeschiin Venice when he’s been forced to step back many times, censuring himself and delivering a vaguely Koolhaasque building. It’s like he’s much more at ease while working in a non-historic scenario. In this case he doesn’t have to deal with any other strong idea. Many times it’s the nature he’s got to deal with but his architectural objects can be placed into it because it’s somehow a neutral canvas. Sometimes he operates into anonymous city landscapes — canvases again.

When reality is too strong or it brings a strong memory, that’s when the clash happens. Like in Venice. Like when a timeless thing like an idea must be judged not in itself, but compared to history and memory.

Why not aesthetics? Because memory and history belong to everybody, while everybody has his own aesthetic sense. Maybe Koolhaas has his own too (of course he should have one) but it’s like it (almost) never comes out.

Not in Singapore, that’s for sure.

PS: Interesting comments on the same subject on this article on Dezeen.

I have friends who live in this and let’s just say that it consists of less than ideal layouts in most apartments, and that community thing conveyed here doesn’t exist. Also, the commercial or retail component is a joke as the general public isn’t allowed to enter this gated development. Imagine opening a cafe here with less than 5 customers per day based on the internalised population. (Spadestick)

Oh well. When the wells runs dry they will make interesting ruins. (Villainesta)